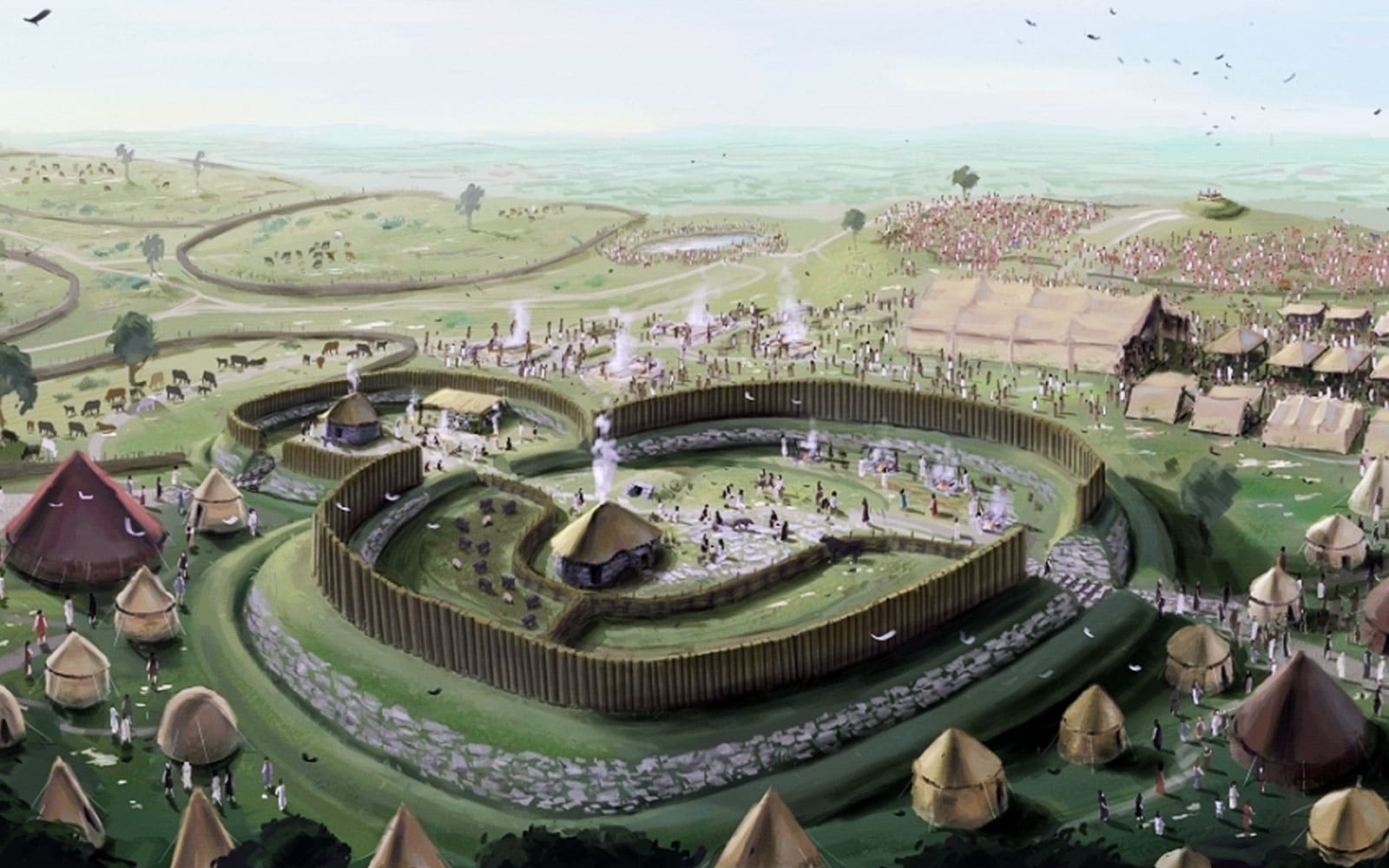 The origins of Uisneach lie far beyond recorded history with surviving monuments and relics dating from the Neolithic (3700-2500 BC) and Bronze Ages (2500-500 BC) which confirm its ceremonial status in pre-historic times.

There is no definitive translation of the word Uisneach as it likely predates the Irish language. It is translated as "place of the hearth" or "angular place”, indicating a temple or ceremonial sanctuary.

In early written sources, the area in which Uisneach is located, is recorded as 'Mide', meaning ‘middle'. Originally a name for the hill itself (i.e. Uisneach Midi, the 'temple' or 'hearth' at the centre), over time the territory expanded to become the medieval Kingdom of Mide which gives its name to the modern counties of Meath & Westmeath.

The first known map of Ireland, created by the greek cartographer Claudius Ptolemy in 140 A.D. is thought to have shown Uisneach (which Ptolemy called ‘Reba’) at its centre.

Since pre-Christian times the hill has been regarded as the ceremonial & sacred centre of Ireland; the meeting point of the ancient provinces, where laws were struck and divisions agreed. In later years, when Tara became the political seat of the High Kings of Ireland, Uisneach retained its position as the country’s spiritual centre.

It was customary for the High King to ritually ‘marry’ the sovereignty goddess (representing the land) at an inauguration ceremony known as the ‘Banais Righe’ (wedding feast of kingship). This ceremony may have been part of the ‘Dail Mór Uisneach’, a great assembly and fair held at the beginning of May (Bealtaine) when a great fire was lit on the hill to mark the onset of summer. 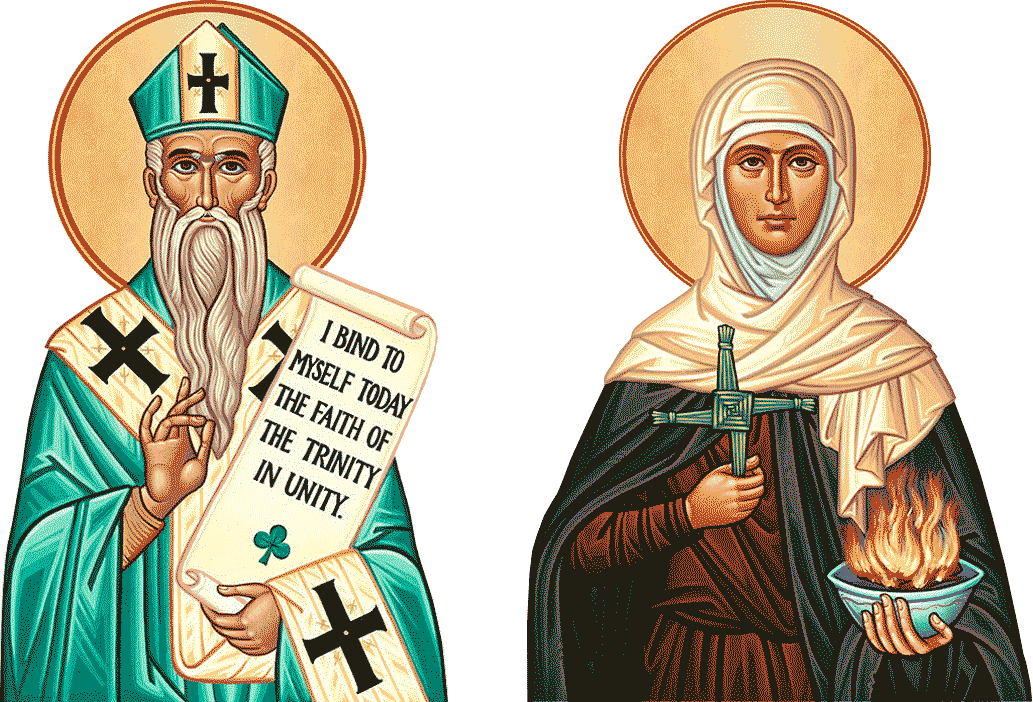 St. Patrick came to Uisneach in the 5th Century, with the intention of establishing a church on the hill. However, due to opposition from the ruling O’Neill clan, he was unsuccessful in his mission which, according to legend, caused the saint to put a curse on the stones of Uisneach. However, St. Patrick did have a well on the hill named in his honour.

St Brigid is another of Ireland's saints that is associated with Uisneach, although she shares this association with the pre-Christian goddess of the same name. According to some accounts of her life, Brigid is said to have received the veil from St. Patrick here on the hill.

Christianity made a further important mark on the hill in 1111AD, when a major synod took place at Uisneach attended by numerous kings, bishops, and clergy. This synod began the process of dividing Ireland into the Diocese’s that still exist today, including that of Meath. 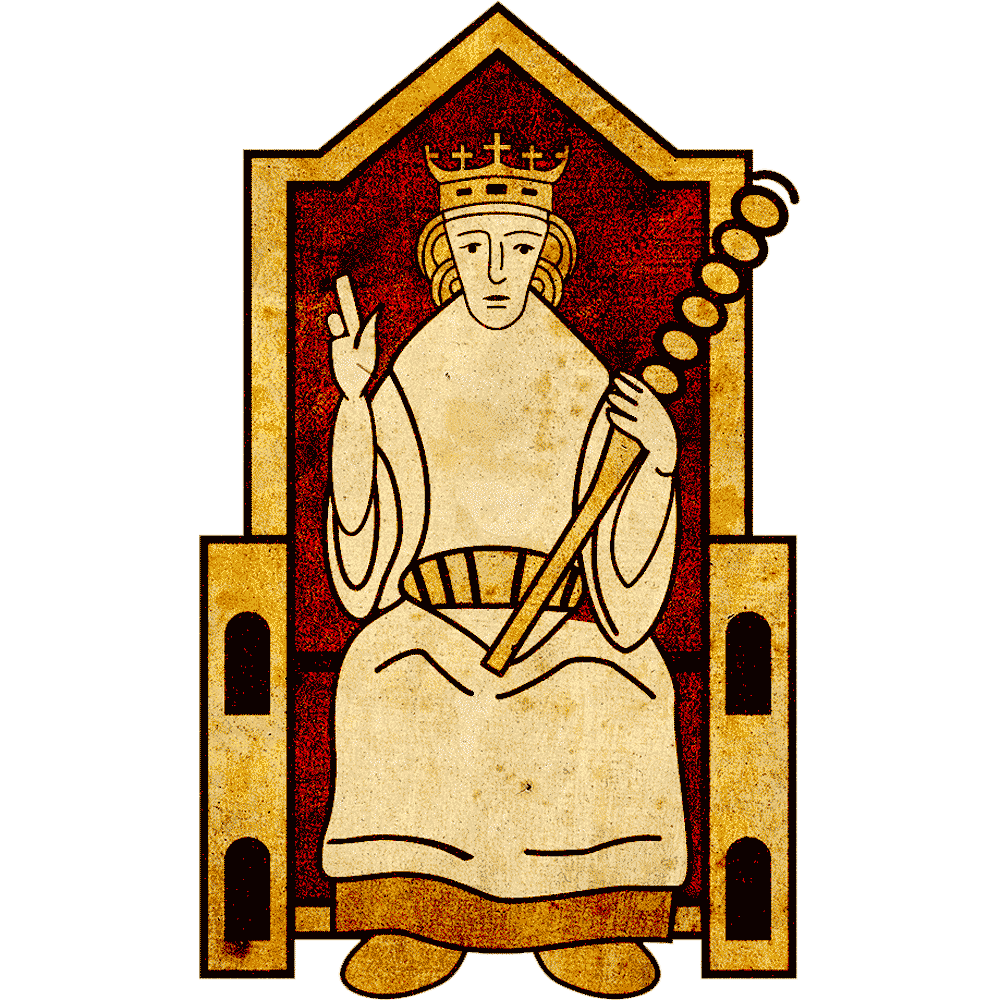 The Kingdom of Mide

In the first millennium AD, Uisneach became the chief palace and assembly site of the Clann Cholmain kings, who ruled over the Kingdom of Mide with some even becoming High Kings of Ireland. The last of these was Máel Sechnaill Mór, who became High King in 980.

His reign lasted until 999, when Brian Boru came to Uisneach to claim sovereignty over Mide and ultimately the High Kingship of Ireland. However, after Brian’s death at the Battle of Clontarf in 1014, Máel Sechnaill was re-instated as High King and reigned until his own death in 1022.

As well as royalty, Uisneach was the residence of important families of poets. Taigh Mór O Coffey, described as being 'Chief Poet of Ireland and Scotland' was born at Uisneach in the mid-sixteenth century. 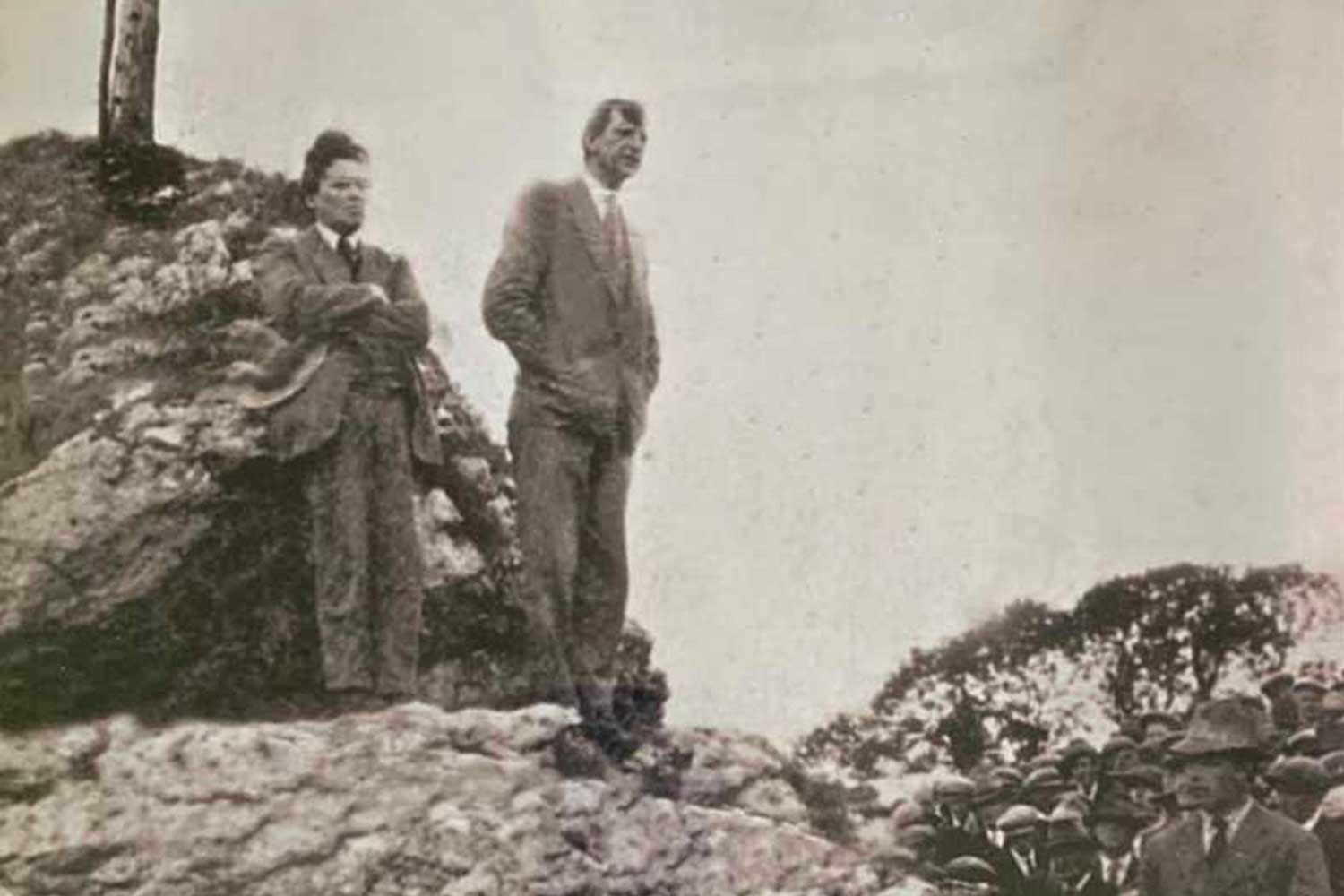 In the 19th and early 20th Centuries, Uisneach was the site of great political rallies, with Daniel O’Connell, Padraig Pearse and Eamonn De Valera addressing huge crowds from atop the Ail na Mireann.

James Joyce was a regular visitor, enthralled by Uisneach’s many stories. He later mentioned the hill in his novel ‘Finnegans Wake’, referring to Ail na Mireann as 'the mearing stone’.

The Bealtaine Festival was revived on the Hill of Uisneach in 2009 and in 2017, the ceremonial fire was lit by the President of Ireland, Michael D Higgins; the first Irish Head of State in over a thousand years to do so. 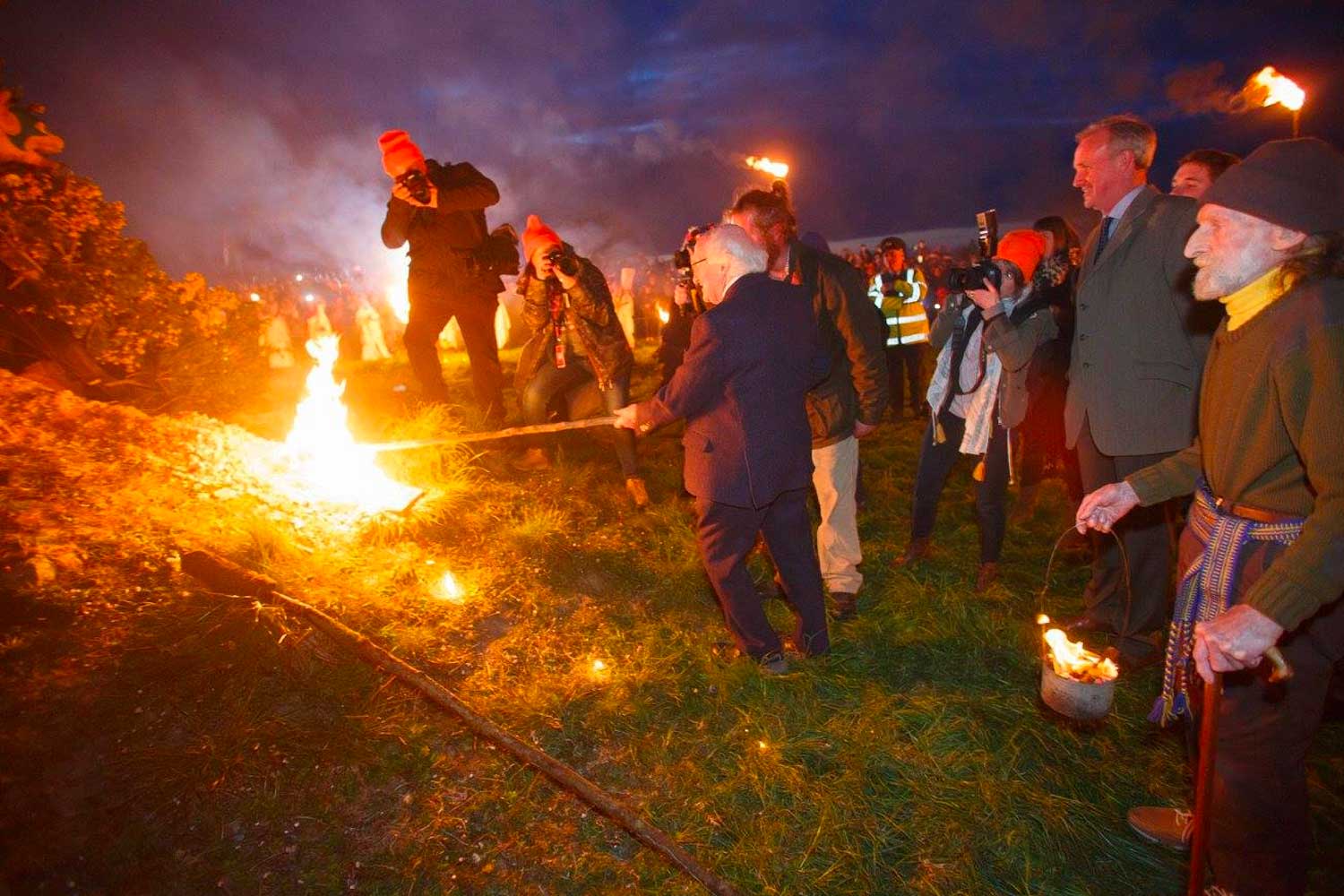