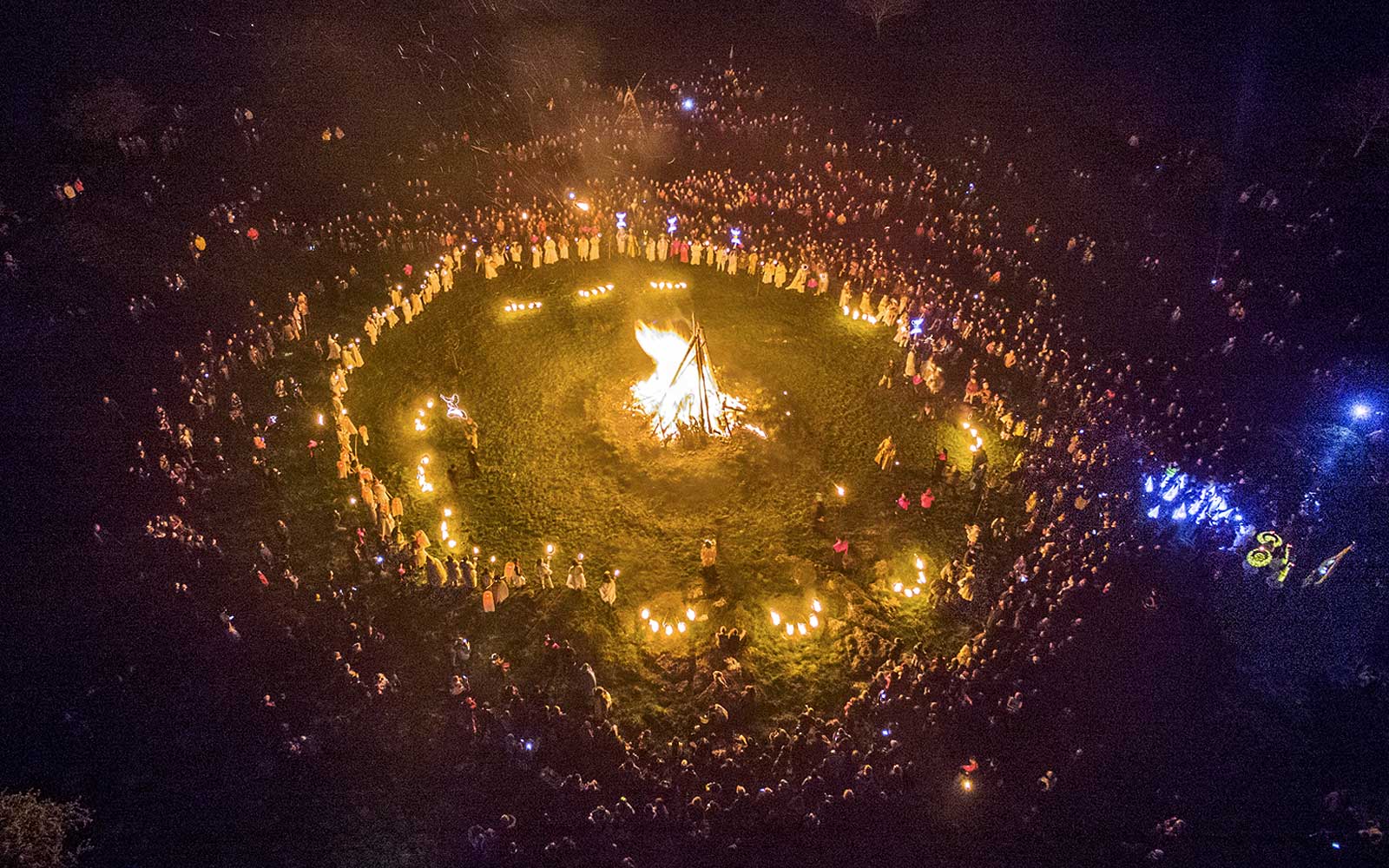 The Bealtaine Fire Celebration on the Hill of Uisneach, is a genuine gathering of the tribes; people of all creeds, from all over the world coming together with the local community to create a truly unique event.

One of the most enduring legends of Uisneach is that it was the location for the first great fire to be lit in Ireland. According to the Dindshenchas (Lore of Places), the fire was lit by a druid named Mide and burned on the Hill for seven years 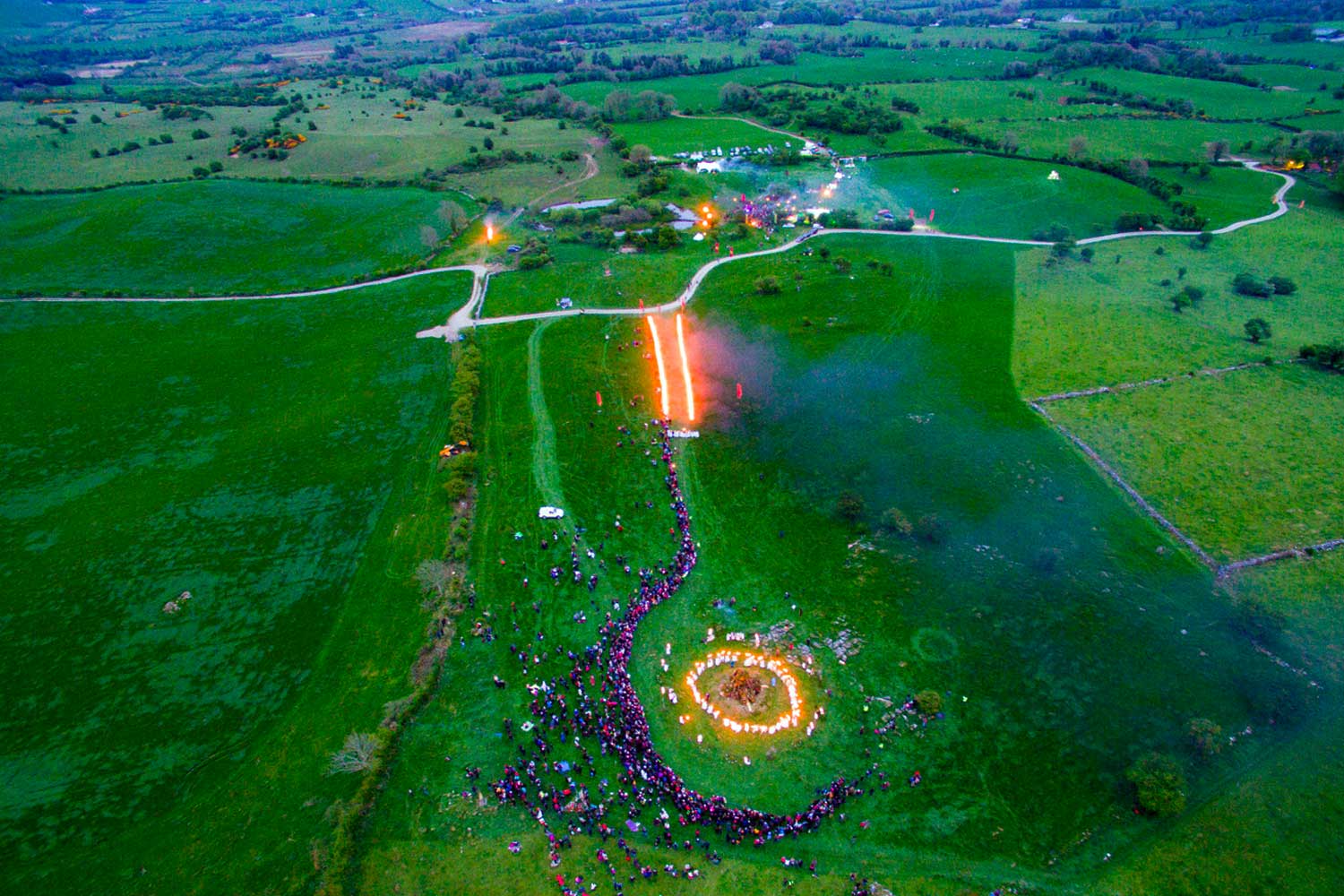 As the centuries progressed, the great fire became the catalyst for the Bealtaine festival; an annual gathering and fair at Uisneach that continued to early modern times. Traditionally, the fires in every home and hearth across Ireland would be extinguished in anticipation of a new flame from Uisneach’s Bealtaine Fire.

Fires were then ignited on the other sacred hills of Ireland, created a unique ‘fire eye’ over the island; symbolising the country’s emergence from the darkness of Winter into the light of Summer. 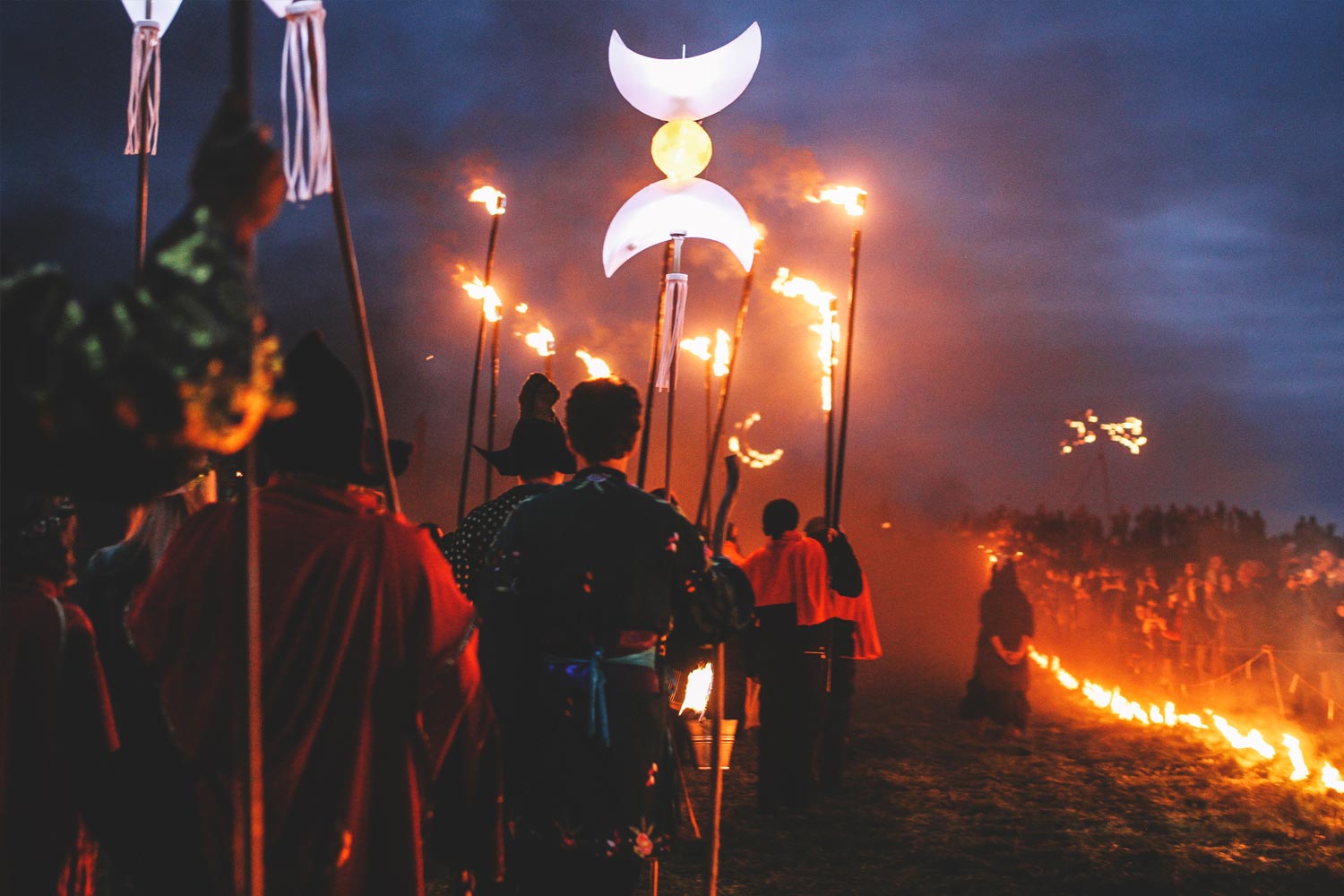 The Bealtaine Festival was often the first chance for neighbours to greet each other after the long winter months and great celebrations ensued. Goods were exchanged and gifts offered to the Gods.

Feasting, dancing, music, tournaments and trade were all avidly partaken in as the festival proceeded. It was also customary to drive cattle around the fire with the belief that the smoke from the sacred fire would protect them from harm. 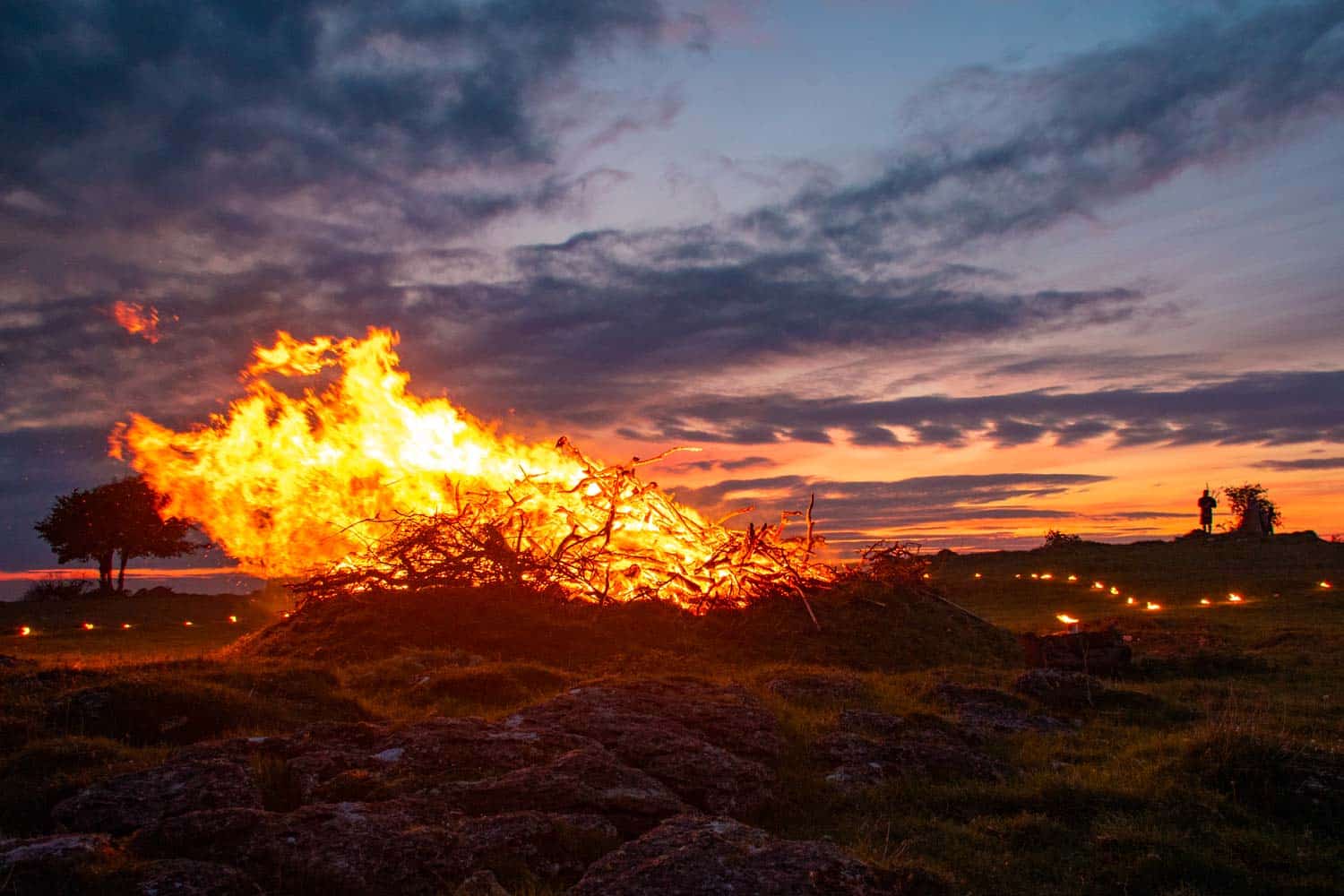 The Bealtaine Festival was revived on the Hill of Uisneach in 2009 and todays' festival remains much as it was in ancient times, a chance to meet old friends and make new ones. A family-friendly event that welcomes all the different tribes to celebrate the beginning of summer at the sacred centre of Ireland.

In 2017, the ceremonial fire was lit by the President of Ireland, Michael D Higgins; making him the first Irish Head of State to do so since the last High King, nearly a thousand years ago.

In 2020 and 2021 due to the Covid 19 pandemic, the public festival could not take place at Uisneach. However the ceremonial fire was lit by the keepers of the Hill, the Clarke family as a symbol of hope, healing and brighter days to come.

After two years we were thrilled to be able to safely welcome everyone back, friends old and new to celebrate Bealtaine with us here on the Hill of Uisneach - The Sacred Centre of Ireland. 2022 was a very special gathering - a gathering where heritage, art, culture, music, fire-dancing, talks, workshops, wellbeing, yoga, story-telling and children's fun was enjoyed and celebrated before the great Bealtaine Fire was lit at sundown. . .

"We would like to thank everyone involved in the beautiful gathering that took place at Bealtaine this year on the Hill of Uisneach, we are still reeling with the overwhelming amount of kind feedback many of you have emailed us with.
Huge thanks to the team that worked tirelessly to create such a wonderful and diverse space that everyone enjoyed.
To the crew that worked many hours to get the site ready.
To our local community here and beyond that form part of the wider team - lighting the distant fires lit every year without fail.
To our immediate neighbours that embrace this ancient tradition.
To all the daytime entertainers that thrilled and warmed the hearts, from the young to the older.
To all the musicians that reminded us of the special bond live music creates between the artist and the audience.
To all the performers that created a spectacle that moved us all as they walked the procession route and joined the fire space.
To the amazingly talented Fire Dancers that complemented the great Bealtaine Fire, and to you; the beautiful people that came to share Bealtaine with us - THANK YOU !
See you all again next year !"
David and Angela Clarke & The Uisneach Team
Book Now!
We use cookies on our website to give you the most relevant experience by remembering your preferences and repeat visits. By clicking “Accept All”, you consent to the use of ALL the cookies. However, you may visit "Cookie Settings" to provide a controlled consent.
Cookie SettingsAccept All
Manage consent