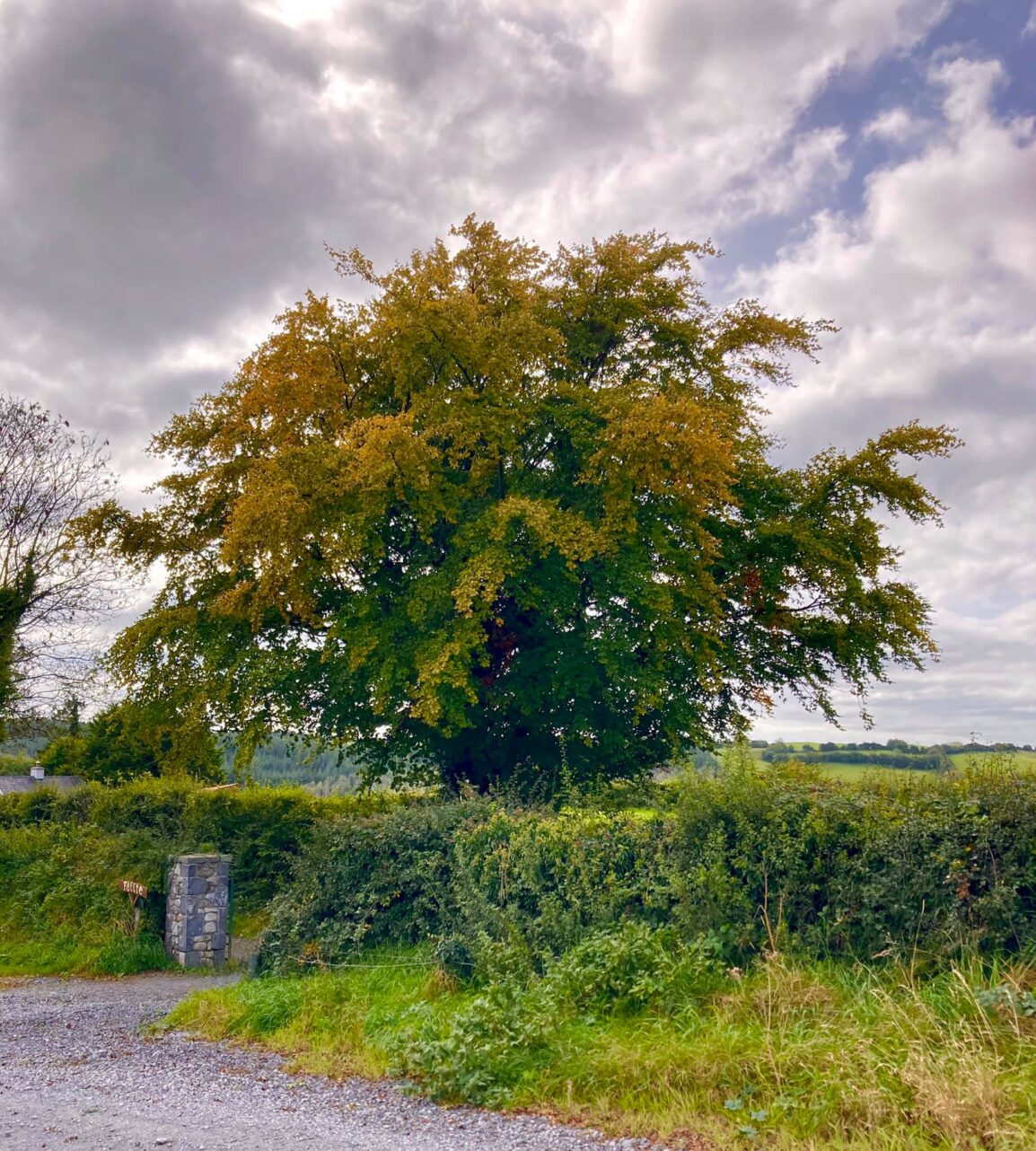 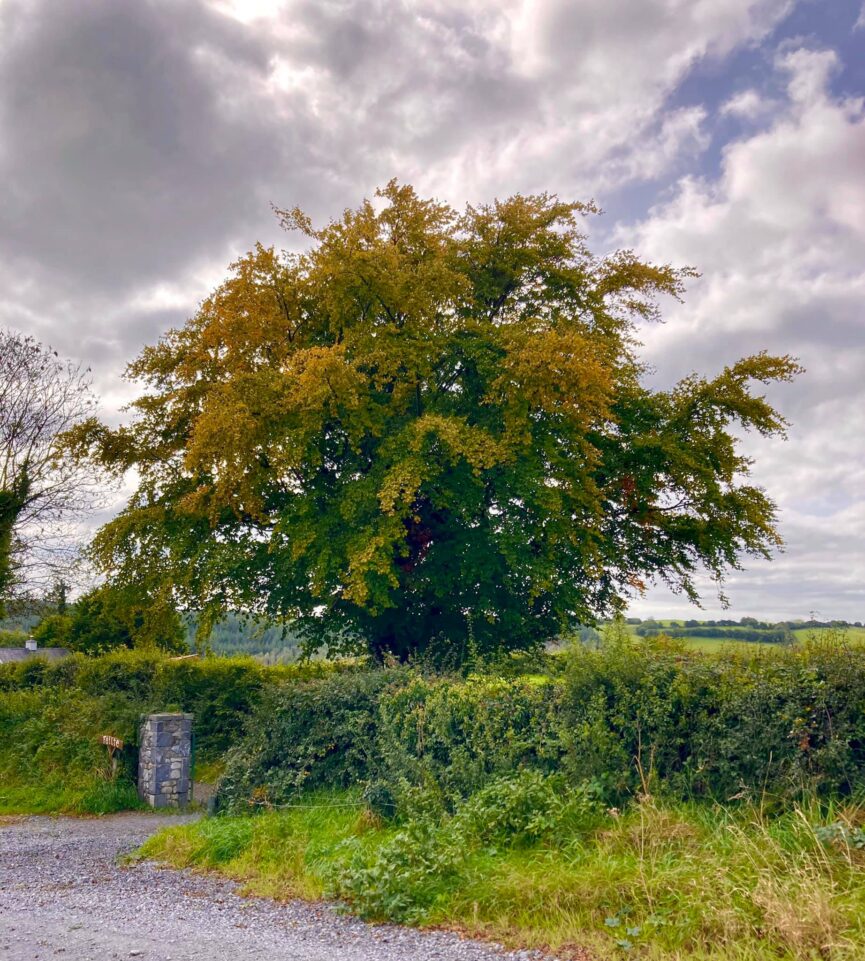 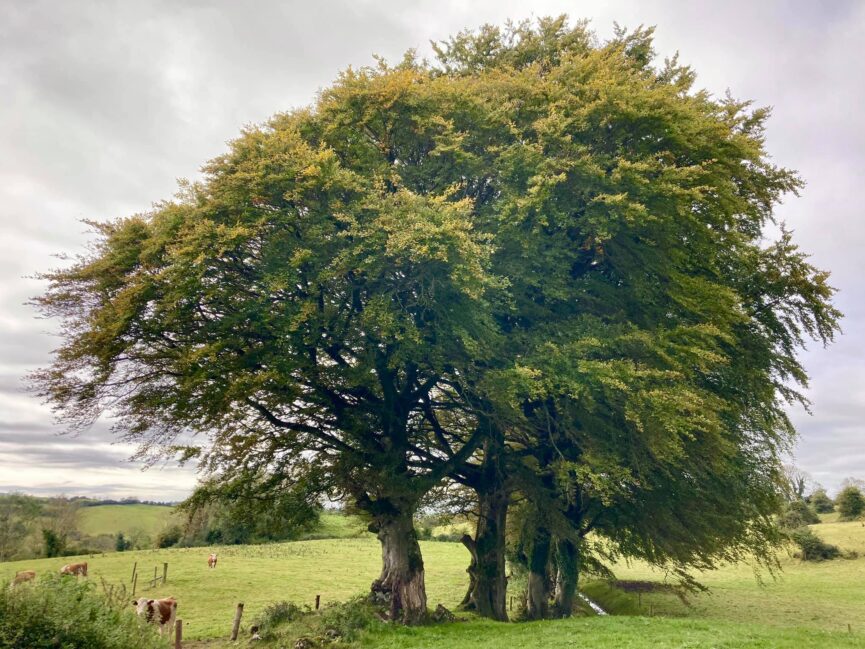 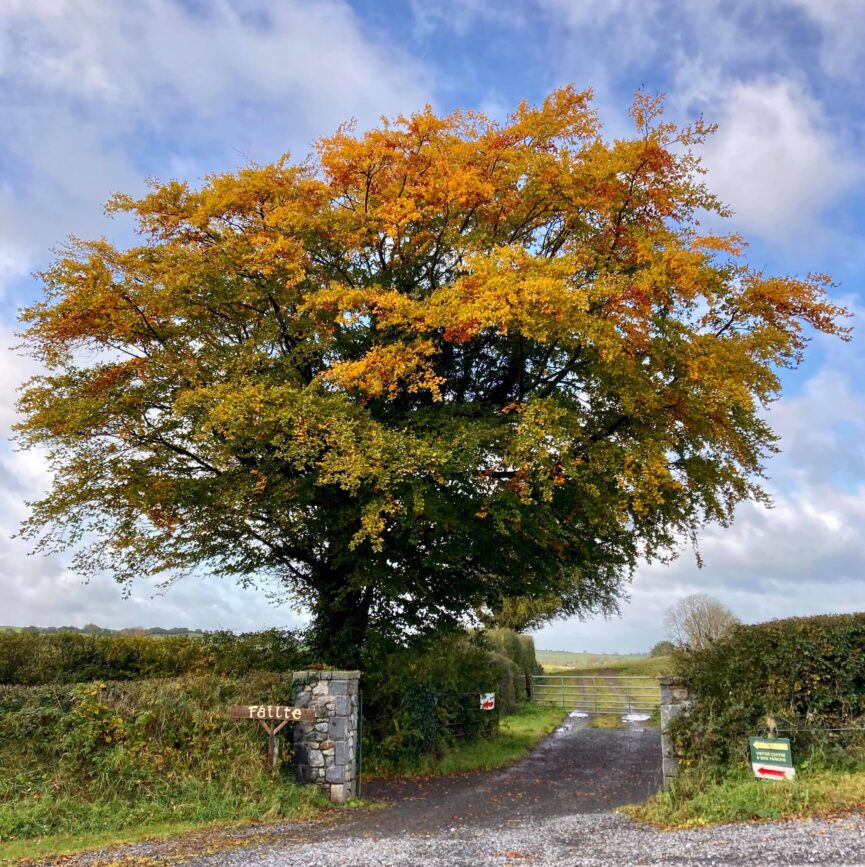 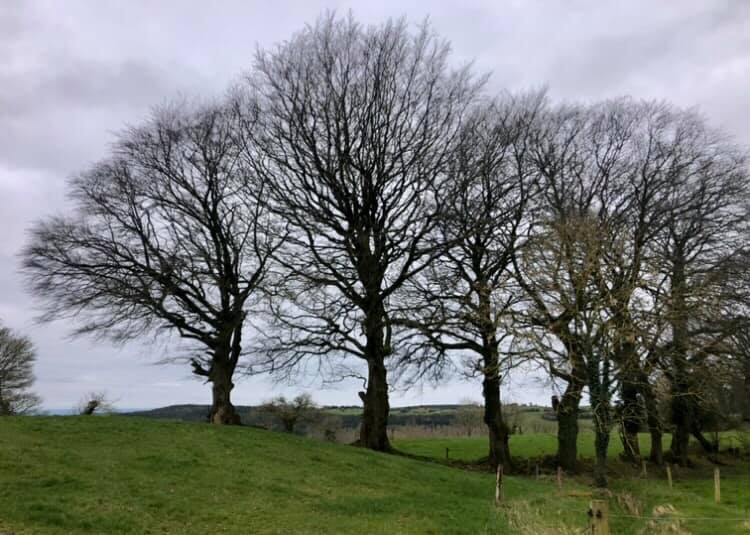 Looking up from under the common Beech Tree (Irish: Fábhile / Latin: Fagus sylvatica), one is drawn to its graceful movement in the wind and upon looking down, its dappling of the ground beneath your feet. The common Beech, a beautiful and interesting species and here is why. . .

The Beech is a deciduous, non-native tree to Ireland and can grow very tall. It has both female and male flowers making it monoecious. Its wonderful bark is an interesting blue-grey colour. A lovely and really interesting feature of this tree is that, after roughly 40 years, a brownish/purple flower appears to grace its branches. . . If these are spotted, it’s understood the Beech is of a good age ! Noticeably too are the leaves in Autumn and Winter; they tend to stay on the tree for much longer than other deciduous species. They may even stay-put until the following Spring, when the new emerging shoots/leaves will then push them off. A great example of these and many of us would familiar with “The Dark Hedges” in Co. Antrim – the amazing avenue of lined ancient Beech’s, said to be over 240 years old !

When you arrive to the Hill of Uisneach and make your way down to the Visitors Centre, we have the most gracious Beech nestled into the corner of the Meadow. Draping its branches downwards from its sturdy boughs, it envelops the lane with musical notes on a windy day and respite from the sun when we’re blessed with some shine !

The Beech for many years, is thought to symbolise generosity of spirit, femininity, wisdom and abundance. Our ancestors would have used this tree to treat a number of ailments. The leaves were made into poultices and used to help heal skin ailments such as psoriasis and eczema. Our folklore tells us that placing leaves under the mattress, would speed up the healing time. The bark would be used to make a warm drink and was believed to help reduce a fever. Other skin ailments could be treated with rain water that had gathered in any of the hollows of older Beech trees.

The word ‘beech’ is thought to have an Indo-European origin and was used for anything to do with writing, in particular, in a religious context. Before paper was developed, the Beech was used in producing writing tablets in Germanic societies and the soot from burned Beech was used in making brownish-coloured pigments.

The nuts of the Beech can be found in a triangular shaped, prickly or hairy looking shell. These have a few tricks under their belts. . . The Beech nut can be used to make an oil. It’s also not uncommon for cattle and pigs to eat them too and for those that are dairy intolerant, a butter can be made from these little gems !

The Beech is an excellent provider for our wildlife. Offering shelter and important food for many species. A Beech woodland makes for an important habitat that butterflies can thrive in. Moth caterpillars will munch their way through the leaves happily. On the bark of the Beech, as well as its seeds, a variety of moss, fungi and lichen is very often found, proving essential food to birds, squirrels, mice and voles.

And if that not enough ‘giving’ from one beautiful tree – our ancestors would have used them to make drums too, creating a tone between that of the Birch drum and the Maple drum.
So, next time you visit us after being met by our regal Holm Oak at the entrance, look up into the majestic Beech tree on the lane and take a moment to wonder at this amazing queen of the woodlands !