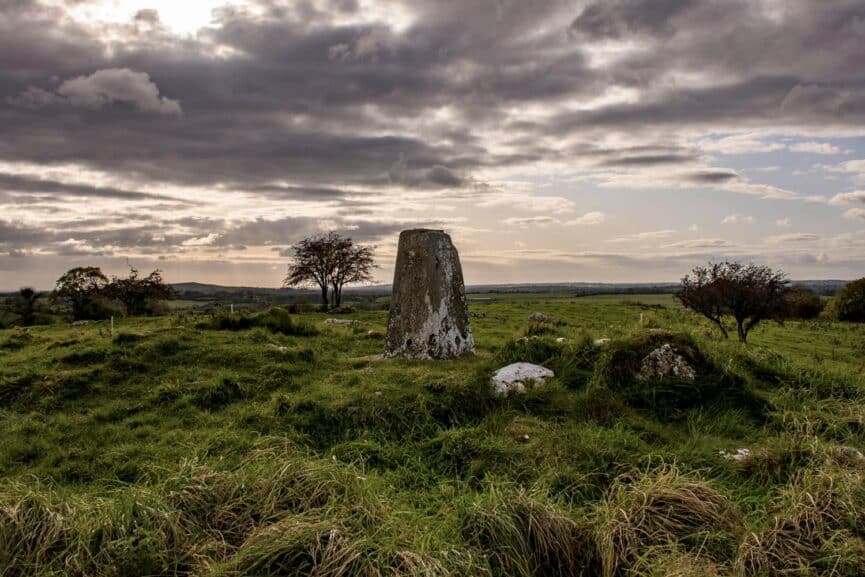 Mythology from the Hill – An Dagda (The Dagda)
The Dagda – ‘the good god’ or ‘the great god’ (‘good god’ or ‘great god’ being meant not in the moral sense of the word, but in the fact that he was good / great at everything !) is one of the important characters in Irish mythology. He is one of the Tuath Dé and is associated with agriculture, strength, fertility, great manliness, magic and wisdom and seen as many things; a druid, king and also a father-like figure. He has control over life and death, over the weather and the crops, as well as the time and the seasons.
Described as a large man or giant, bearded and wearing a hooded cloak. He holds a magic staff, sometimes a club or a mace called the lorg mór or lorg anfaid with which it could kill with one end of it and give life with the other end. He has a cauldron called the coire ansic which never ran empty and his magic harp – uaithne – which could control mens’ emotions, when it wasn’t changing the seasons !
An Dagda is associated with the Morrígan (“great queen” or “phantom queen”) but is also Boann’s (“white cow”) paramour. His children are named as Brigit, Cermait, Aengus, Bodb Derg, Aed and Midir. He was the brother or father of Oghma.
An Dagda himself seems to have many names too, each giving a window of insight to the different sides of his character…
Eochu or Eochaid Ollathair (“horseman, great father” or “horseman, all-father”) / Ruad Rofhessa (“mighty one/lord of great knowledge” / Daire (“the fertile one”) / Aed (“the fiery one”) / Fer Benn (“horned man” or “man of the peak”) / Cera (possibly “creator”) / Eogabal (possibly “striker”) / Easal & Eogabal.
While the Christians were penning our Irish myths, it is thought they brought a bit of comedic lightness (or denigration ?) to the description of the Dagda when they described him as oafish and crude, wearing a short rough tunic that barely covers his rump, dragging his great penis (lorg mór) on the ground, in the Cath Maige Tuireadh ! But then there’s the another description and quite fitting to his role in the mythology as “a beautiful god of the heathens, for the Tuatha Dé Danann worshipped him: for he was an earth-god to them because of the greatness of his (magical) power” in the Coir Anmann (The Fitness of Names).
Another of the extraordinary finds here on the Hill of Uisneach was the stable of the Dagda’s ‘solar horses’. These stables lie on the north flank of the Hill, under a wheel-shaped enclosure which concealed two astonishing souterrains beneath a paved floor – one in the shape of the divine Mare is pursued by another in the shape of a galloping Stallion.
According to legend, many of the ancient monuments found across the beautiful Irish landscape were built by An Dagda as houses, both for himself and for his many children. It is said he made his home here too. . . “and they came to Uisnech of Meath in the centre of Ireland, for ’tis there that was Eochaid’s (An Dagda’s) house with Ireland stretching equally far from it on every side, to south and north, to east and west.” – Tochmarc Étaíne (Yellow Book of Lecan)
Could it be that on the Summit of the Hill of Uisneach, where a presumed Passage Tomb remains are found, be this wonderful characters abode. . . we like to think so !